Synopsis - The show is in One Act

AUGUST 1945. This story takes place in a Women’s Prisoner of War camp in Burma. Eleven of the twelve characters have been imprisoned here for at least a year, some as long as three. Edna, the twelfth character arrives at the camp during the first scene. Her husband has just been executed and she has been moved from the multi-sex prison further north, to the all-women’s camp here. The show begins with the women rising from their dormitories for the day and attending the “Tenko” – the roll call (Song 1- Hell). The governor/ess’s voice is a sound recording and the women face to the front to hear what she has to say, therefore the audience sees the action as if they are the guards or the governor. They hear the usual propaganda fed them by the Japanese that it won’t be long before the war is over with the Japanese being the victors, a morale deflating exercise which happens every day. As the ladies are dismissed Edna arrives and is seen by the two youngest girls who, Mary and Connie. They demand to know her story and she sings of her "Fairy Story" (Song 2) which now has gone wrong. This satisfies the girls and they leave. One of the girls, a Jazz singer called Abby has been listening. She is extremely tough and synical but after a brief altercation tells her there is a spare blanket in the dorm that she can use. We then see some of the girls working in the fields ploughing the crops, which is a nearly pointless exercise in the heat of the camp. (Song 3 – A Day in your life). Concealed in the work area is a stone, with resistance notes of how the fighting is going, it is their small voice from the outside world and informs them that the fighting is not going the Japanese way at all their morale is slightly lifted. They tell the girls the news the next time they are all together in the dorm. In the background we hear the strains of “We’re gonna hang out the Washing” from the wireless. Mary explains that the wireless has only 8 songs and is controlled by Abby, they play a different song depending on the mood. The eighth song “Tipperary” is saved and will only be played the day the war is over.

Later that evening as dusk falls on the camp the girls reminisce about their lives before the war (Song 4 – I Remember). The next morning Theresa enters the dormitory in a panic and tells the girls that she has just seen Abby having sex with one of the guards in the back-sand (Song 5 – The traitor within). The girls are horrified and when Abby returns she is turned on in rage by the girls, Abby leaves but as she does the ground in front of her is spat on by Edna. Abby goes to a secluded spot and sings of her love for the guard, who she first met and loved before the war, and the girls would never understand (Song 6 – He’s A Man). Mary has been watching from afar and hears the feelings. She asks Abby why she doesn’t tell the girls to which Abby is adamant that will never know. Mary agrees to keep the secret. Back in the dorm the girls are surprised when Theresa then informs them that the war could be at an end soon, which may not be as good as they first think. They could just line the girls up and kill them, with machine guns. Rachel tells the girls that they must learn to use what they can should that day come, sticks, stones, anything has to be better than standing there and waiting for it. (Song 7 – Fight to live). The girls agree and start to think about how they would defend themselves. Time passes and the subject comes back to the traitor, Abby and what should be done. Led by Cathy, they plot their revenge (Song 8 – The Traitor in Disguise) and when Abby returns they grab her and use “The Berry” to inscribe a red circle in her forehead to symbolize allegiance to the Rising Sun, the Japanese Flag. Nell, Mary’s mother, a schoolteacher who is devoutly religious, enters and breaks up the ritual. Once done so she orders everyone out except Abby and both Nell & Mary say that they will stand with her (Song 9 – Hymn).
The girls practice for the fight and then think about times gone by first with “That night on the sand” (Song 10) and “The Life we Had” (Song 11) . We then find Abby and Mary alone. Mary is interested in Abby’s singing career before and Abby tells her of her life (Song 12 – Back Home). When the next roll call comes both Mary and her friend Connie are missing. The girls are told that a search will begin and woe betide the girls if the guards find them first. The dorm splits up and looks for the missing youngsters. It is Abby who finds them, in her secluded place. Mary and Connie had decided to run away, Nell and the rest of the girls are horrified but thank Abby for her help. 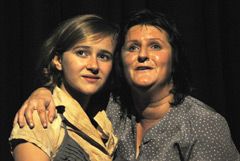 The next morning the girls practise again but don’t take enough care and Nell is summoned to the governor’s office. Abby joins Nell and helps them survive with nothing more than a warning. The girls are now convinced that Abby is not the bad person she first seemed and contemplate their thoughts (Song 13 - Maybe we were wrong). That lunchtime the girls suddenly hear “Tipperary” being played on the wireless system, shocked themselves they are worried that the governor will be suspicious but before anything more can be said a single gunshot is heard. (Song 14 – One of Us). Abby has been shot dead by the guards who realised that the wireless was a system. Mary is heartbroken and the rest of the girls are shattered by it. They have a small memorial service at which Mary sings a “Pie Jesu” (Song 15). The girls have almost given up hope and Nell tries to remind them that somewhere there is hope (Song 16 – Somewhere). Just as Nell finishes reassuring the girls the roll call bell sounds, at an unusual time. This must be the one, they think and prepare for the fight that might ensue. (Song 17 - This is the Moment). The girls are lined us for roll call expecting to be shot. The governess informs them that the war is over, and, to their complete surprise, they will be released later in the day. Stunned and overcome the girls are left to rejoice in the fact that they will indeed be going home (Song 18 – Finale (Somewhere)).