In 2013 Tim produced released a new idea into the world of musical theatre called The Accompanist. 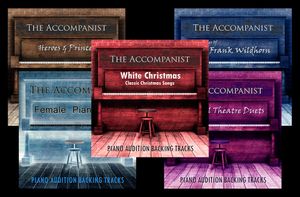 When audition candidates step into a room they are asked to perform with just a piano. Most Karaoke tracks of musical theatre songs, if they were available, were the full orchestration, but this can sound very different to a solo pianist. The Accompanist is a collection of piano only tracks designed for musical theatre audition candidates and performers, each track replicated in key and tempo of the original song.

The first two albums released featured the more modern songs from the Walt Disney catalogue including songs from The Lion King, Beauty and the Beast, Aladdin, Newsies and more.

The albums help prepare musical theatre performers for that big audition or performance and have even been used on Britain's Got Talent.

With the success of these albums Tim has since produced a total of 14 albums for musical theatre performers which have been popular all over the world.

Soon to be released : A Rodgers and Hammerstein Songbook